Reflecting on your day, hundreds, or thousands, of things happen. In fact each day of your life this is so. This moment, Now, is therefore only one of many, many moments.

Yet this moment, Now, is as it is. Indeed, it cannot be otherwise.

Moments of the past are merely as we recall them. Moments of the future are dreams, creations of thought. The division of moments, the division of our lives, into past, present and future is mind-made and ultimately illusory. The past can only be remembered, now. The future only imagined, now. So in essence all there is that is real, is Now.

When your attention moves into the Now, there is space, clarity, simplicity, peace. There is also an alertness.
Many people confuse Now, with what happens in the Now. But the Now is deeper than what happens in it. It is the very space in which it happens.

This moment, Now, is the one constant truth. No matter what happens, no matter what changes, one thing is certain … it is always Now.

Makes you wonder why we dwell on the past and worry for the future, doesn’t it? Wasting Now.

Don’t waste it, embrace it. Now.

We have a strange relationship with hair.

We coif it. We clean it. We condition it. We cut it and shave it. We brush and comb it. We put things in it to hold shape and create effect. We run our fingers through it. We twiddle it. We caress our face and lips with it. We examine its ends. We scratch it. We spend a fortune styling it. We protect it from the rain. We comment on other people’s.

Yet, find one in the bath at a friends, or on the bathroom floor at a bed and breakfast; find one in the bed at a hotel – especially a short curly one; get a strange long one caught in your toes … and we go mental.

What do we imagine? What horrors are in our thoughts? What deadly harm might arise from this strand of humanity?

Imagination is more important than knowledge. Knowledge is limited, but imagination encircles the world.

Crisps, some hard boiled ‘sucky’ sweets for the journey. A packet of biscuits, half eaten; mini cookies actually (very nice). Some chocolate; bite size for quick application whilst driving. These were the contents I could recall were in the bag.

That stage between sleep and wakefulness is a curious one.

I’m in a cabin in the woods. It’s the early hours of the morning. I lie still and listen.

There’s something in the kitchen of our cabin. It sounds like it’s working its way through these contents? Delicately but confidently. An animal picking through our carrier bag with food.

I lie as still as I can. What to do? Make a noise? Scare it away? What if it’s an unscarable animal? Are there such creatures? At 4am, or whatever, there most certainly are! I do the brave, manly thing and ease the duvet closer to my chin. It’s a well known fact bears don’t like their food duvet wrapped.

My imagination runs riot. I could take on a squirrel, I thought. But then, what if I freak it out? I’ve been in a room with a spooked bird before and it’s frantic. What does a squirrel do when it’s scared?

How big is a raccoon? They have them hereabouts I think? Are they quick? I’ve never seen one up close and panicked.

I can hear my breathing and the rustle. Nothing else.

Our bag is how we left it. No crumbs on the floor. No torn packets. No animal droppings.

It wasn’t a dream, but… there are leaves on the ground outside my cabin window I notice. The window between me and the kitchen.

Imagination is wonderful isn’t it? At 7:30 am it is anyhow. Less so at fourish. 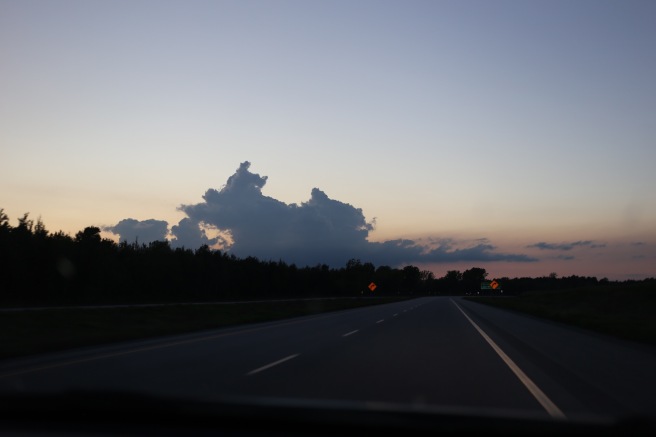 Do you see things in clouds?

What do you see in this snap from last evening?

I see a dog, on its back, head resting on a baby rhinoceros, playing with the puppy laying on its stomach.

But now you’ve read that, maybe that’s all you can see now too?

Imagination is mad sometimes. And sometimes it is killed by a story. 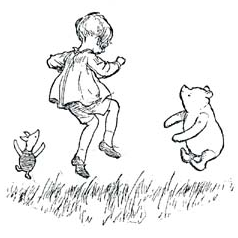 Mostly we go through life growing up.

We get older. We learn from experience. We generally therefore get wiser. We get more aware, more tolerant, more reasoned.  We have knowledge, wisdom and experience on our side. So we can make better decisions, better choices. We can be balanced, measured, sage.

A child’s logic. A child’s wisdom.

The problem is we don’t stay six, now and forever. We become, seven, fifteen, twenty six, fifty one, seventy three. At each stage of ‘growing’ we take on more rigidity, more stuckness, more ‘one way’ thinking. Life experience actually binds us. We learn rules, habits, behaviours, beliefs which constrain our potential.

How would a six year old face this? What creative, unbounded, imaginative solutions come from the naive, inexperienced, free mind of a child?

Anything is possible. Maybe adults should start growing down? Going back to the free, unencumbered wisdom of childhood.

Maybe we all need to stay six forever?

A colleague of mine recently copied the team on a document.  They failed to copy me. I only discovered this when another colleague asked me for a view on the work.

This was the third time this had happened.  The team is only six people and we have been formed for about six months and so I have viewed this as interesting. Actually no, I have viewed it with suspicion. I have started to create stories, in my head, about a hidden intent, tales about a potential dislike or disregard for me. I have been telling myself that once is a mistake, twice is careless, three times is deliberate.

I have of course taken an adult approach to this and spoken to the individual directly. (You know I’m lying here, right?)

Yesterday I was in a team meeting and another colleague began a discussion on a topic they are leading. They referred to the pre-read they had shared.  I said I hadn’t received it and they apologised and sent me a link to the soft copy on our systems. I received the email and clicked the link. I didn’t have access rights to the material.

Now my story has legs. It has all the makings of a novel. With characters, twists of plot and an evil back story.  I have trapped myself in a fabrication of my own making. I am unconsciously looking for evidence that my tale is correct.

Imagined dragons. Stories of the mind. Myth and truth.

What if Brussels sprouts were square?
What if turkey meat was blue?
What if parsnips tasted of coconut?

Believable things? Maybe, maybe not. But you can imagine them.

What if knowing these things gave you more choice, more freedom, more joy?

If I asked you to draw a picture. A picture which portrayed the act of making tea. The intent being to communicate the process. What would you draw?

You might depict a kettle boiling. You might draw a teapot. Water pouring into the teapot. You might sketch a teabag or you might show a tea strainer. Maybe a cup and saucer, or a mug. You might have a jug of milk, or a bowl of sugar. Maybe even a biscuit being dunked?

But would you draw tea plants being dunked in hot bubbling geysers? Would you show a cocktail shaker being vigorously oscillated with its tea and water contents?  Would the teabag be shaped like a rubber ring stretched over the cup so that the water could pour through, into the cup? Probably not.

Now it might well be that the tea making process has been honed. Improved beyond improvement. Maybe the teabag or the teapot and strainer are supremely efficient and effective. Maybe putting the tea into the water is the most practical method, rather than pouring the water slowly through the tea? But we probably thought we had it all worked out, for many centuries before the teabag was invented. Now we have at least three shapes of bag in the world.

Day to day, in everyday ways, we are constrained in our thinking by our knowledge. By historical experience. By custom. It makes us lazy. Deprives us of imagination and true creativity. Diminishes our ability to think divergently. It denies us new choice.

What are you doing right now, which you simply take for granted?

It is the way it has always been.

Try breaking away from the constraints of what you know.

Maybe not knowing, will grant you a new freedom?

The John Lewis Christmas advert is out. The man on the moon. Its intent is to highlight the loneliness of many old people at Christmas and to champion the concept of giving.

But the scientists, the cynics, the ‘ne’er be happies’, the journalists are already criticising the story. In the Guardian the other day, an article entitled “Who is moon Hitler?” appeared. How can a girl have a telescope that magnifies the moon so well? What is a man doing on the moon in a shack? Is he a banished criminal? How can he breathe? Balloons could not carry a gift to the moon, don’t people understand the physics?…

I wonder, have we lost the magic of metaphor? Where have the dreams gone? Does humankind not draw inspiration from the improbable any more? How do we progress without imagination? Where on our journey did we lose that childhood gift?

I have been with a number of people who, on seeing the advert, have shed a tear. Of course they have. As I was discussing here the other day, meaning making is an inherent human need and this beautiful piece of cinematic art gives us meaning. It connects us to our emotions. It reminds us of family, of loved ones, of Christmas, of being alone and of loneliness. That creates meaning for us.

John Lewis is being commercial, naturally. The advert is not entirely altruistic. But its association with Age UK is intended to highlight the number of people, particularly old people, who will feel loneliness this Christmas. A worthy human cause.

Notwithstanding the commerciality, the charitable intent and the human story though. Surely, even in a commercial, money driven world, there is space in our humanity still for hope, for imagination, for a wonder delivered through the magic of metaphor? If not, then as human beings we have fallen far.

We should look to our children, where magic and wonder still thrive. Where story and metaphor is still rich and wondrous, filled with meaning. Where experimentation and imagination fuel learning and growth. As adults we would do well to reconnect with the child in us.

Otherwise, where has the magic gone?