Why do we push ourselves even when we want to give up?

There appears to be an inner battle at play. That part feeling the pain, wanting to concede and that part that doesn’t want to be beaten, wanting to succeed.

I rode a bike yesterday, for the first time in fifteen years. Around Montreal. I guess if you’re going to start again after fifteen years there are worse places to begin. The ride took us along the Lanchine canal, followed the north bank of the St Lawrence river for six kilometres, then cut across in land, via a cute little cafe with Italian Ciabatta to die for. Once replete, we headed back along the remainder of the canal before heading to the island of Parc Jean-Drapeau where we rode our bikes around the Gilles Villeneuve F1 track before returning to our starting point. Around 50 kilometres or 30 miles.

From the moment we began the ride out to the Parc and F1 track, I knew my body had had enough. My thighs screamed stop. The sun burned down on my face and neck as we crossed the Pont de la Concorde. I was done. But the lure of saying I’d ridden around a Formula 1 race circuit kept me going.

The return journey though was another matter. My prize had been won and that part of me feeling the pain was now winning too. I dawdled back across the bridge. The slight incline up really proving hard, as my legs screamed out with every turn of the pedals. My hands were now numb too, from over gripping the handle bars as my legs struggled – somehow holding on for dear life appeased my lower limbs. The final kilometre saw me stop several times and push the bike. Even walking proved hard as my legs were like jelly and walking in a straight line seemed beyond me. My arm had developed an uncontrollable twitch and my thumb, without my say so, wriggled about like a worm in the sunshine, seeking the solace of damp and dark. But I had to return the hire bike, so the part driving me on kept going. I was also with my daughter and couldn’t let her down, so I kept going.

The battle between these parts of me was a fight to the end. “Just lie down on the grass and the pain will ease.” versus “You can’t give up now you’ve come this far. Think how good you will feel having cycled 50 kilometres on your first bike ride for fifteen years.”

But tomorrow is another day… Ouch. 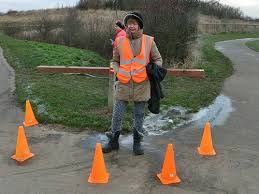 Last week we were in London. We sat near the river. In front of us was an area of grass, taped off so that it could recover from its well worn state – presumably picnickers, sunbathers and walkers like us had rendered the grass threadbare. To the side, was an area marked off by linked metal barriers – the kind that are used for crowd control. Behind this protection were some pallets of building materials, a pile of some sort of mixed aggregate, some bags of waste and general rubbish – an adjacent building site suggested its purpose. Later we saw a newly laid concrete pathway, blocked by traffic cones, linked with tape.

Cones, barriers and tape to block areas off where we shouldn’t go. Areas that are out of bounds.

Do you think it’s like that in our heads too?

Memories marked out as ‘no go’ areas. Blocked by our unconscious mind as it considers them dangerous places, where we might get hurt; just like a building site. Our subconscious taping off parts of our personal history that need to be left to recover, like a worn out lawn; vulnerable, fragile and otherwise exposed. New experiences coned off, whilst we make sense of them, give them perspective and meaning; allowing them to set into our map of the world like newly laid concrete pathways.

How often do you think showing vulnerability is weakness?

We hide our own vulnerability so that it cannot be judged by others; and also by ourselves.

Yet, how often do you see someone else show vulnerability and see it as pure courage?

How in the face of so much difficulty, pain and suffering can this brave individual reveal to the world the extent to which they are hurting or not coping? Generally we don’t beat them up, we don’t pick on a weakness, rather we are inspired by their strength, warmed by their compassion, moved to support.

Vulnerability is not weakness.

Let’s bust that myth once and for all.

A sleepless night. A trapped nerve in my shoulder.

It’s hard to concentrate and hard not to. I can’t think and I can’t sleep. The pain is my focus.

Physical pain can do that. But so can emotional pain.

Feelings can dominate your very being. Consume you. Just as much as physical hurt.

I have painkillers now for my shoulder. They should soon help the physical pain. Chemicals in tablet form that I acquired from the local pharmacy. Even though I’m in a fairly remote location, I can get help with physical pain.

Emotional pain is harder to treat.

Yet just as debilitating.
Maybe more so.
Harder to get help.
Harder to cure.