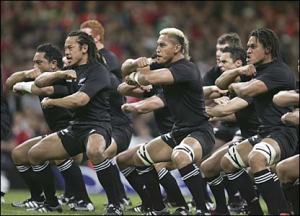 You may have read about the Twitter wager between two airlines over the result of the Rugby World Cup this weekend.

But tribal belonging is deeply in our psyche as human beings.

It appears in our sport of course, supporters partisan to their team, chants such as the haka to intimidate the opposition, colours and songs to mark our tribal belonging. It appears also in organisations; departments and divisions having a sense of identity and creating competitive tensions. Members of merged organisations still secretly belonging to their original tribe, sometimes overtly. It happens in families and our language reinforces it with phrases such as ‘Beryl’s side of the family’, or in church at a wedding, sitting on the side of the bride or groom. Our family of birth is often our strongest tribal connection. Tribes appear in music tastes too – think Mods and Rockers. Even in such matters as car ownership – the MG drivers club etc. We wear uniforms, shirts, badges, fly flags, sing songs all to reflect the tribe we belong to.

There is a tension here of course. The up side is the sense of belonging that the tribe creates. The potential downside the sense of conflict and competition it engenders.

We need to belong. Our tribal belonging is an indication of who we are.